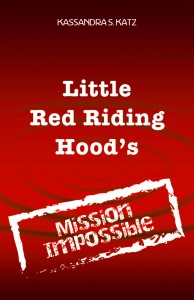 Little Red Riding Hood is in a bad mood, because
a) her name is a disgrace,
b) she toils from dawn to dusk on her father’s farm,
c) her mother is in prison.
To change anything about these dire circumstances seems impossible. Then she meets a True Wolf, and Little Red Riding Hood gets swept up in the struggle against the evil Queen.

“Get up, Little Red Riding Hood, and feed the chickens!”
I stay in bed. I have no desire to get up, to feed the chickens, to work on Father’s farm any longer, and I am also sick of being called Little Red Riding Hood.
I would rather be a warrior, the best and most feared swordswoman in the whole country. Little Red Riding Hood – avenger of widows and orphans! The glorious fist of justice!
Drat! That stupid name ruins it all.
Zora. That would be a good name, promising swords and adventures.
“Don’t dawdle any longer, Little Red Riding Hood!” Father shouts.
“Coming!” I jump out of bed, get dressed and hurry down the stairs into the kitchen. Father sits at the table, glowering at me.  “Morning,” I murmur and rush out of the door before he starts showering me with insults. Reaching the henhouse, I start my daily work: collecting eggs, raking up the droppings and spreading chicken feed. Actually, I like the chickens, the way they cackle and stumble over one another getting to the grains, as if they hadn’t had anything to eat in ages. It just annoys me that they belong to Father.

“Where are you?” Father calls. “It’s time to milk the cows and drive them out to pasture!”
I walk over to the house, where Father stands in front of the door, waiting for me. I hand him the basket with the eggs. “That’s all?” he asks, frowning.
“I’ve looked everywhere! Really!” I defend myself.
Murmuring something about lazy hens, he hobbles back inside. Like every other morning, I wait for him instead of leaving this place once and for all.
I have tried that.
When he comes back, I follow him to the cowshed, grab the milking stool and the bucket, and begin to work. Everything made of milk is delicious: cream, butter, cheese. Thinking about it makes me hungry, but we have to milk all the cows and stow all the milk churns on the horse cart before I will be allowed to make breakfast.
It has been like this every single day since Mother left. She used to make breakfast and bake bread and pancakes for me. She used to take me in her arms before sending me off to school.
“You’re daydreaming again!” Father shouts. “Hurry up! The milk will turn sour in the udder if you carry on like this!”
“Yes, Father!” I reply and continue to milk.
Finally, Father leaves, heading for the butter churn. I watch him go, wishing he would never return. I wish for this every day, hitherto with no effect; he hasn’t been struck by lightning, neither has he stumbled across cutthroats. No wild animals have shied the horse, overturning the cart and breaking his neck. None of this has happened yet, but I don’t give up hope. I turn around and go back to the house. If the bread isn’t baked and the house cleaned when he returns, he will beat me again.
Milking, mucking out, cleaning, cooking, baking, scrubbing, picking, weeding, harvesting. Work on the farm never ends.

The work isn’t half as bad as eating dinner with Father.
It would be easier to bear if he were mute. I imagine him opening his mouth and not being able to utter a single sound, trying again and again until his face turns as red as fire, until all the mean words lace up his neck and choke him. With this happy thought in my mind, I cut myself a piece of cheese.
“You’re a bad girl, but the hard work will teach you to be obedient. Who knows? If you try hard, I might even find a husband for you one day,” Father says.
“Yes, Father,” I reply and take a big bite.
“You’ll be grateful to me, mark my words.”
“Sure, Father,” I murmur, chewing on.
“And don’t speak with your mouth full!” he reprimands me.
I nod and promptly take another bite of bread. I am Zora, and nothing he says can impress a Zora. I squint at the piece of bread that hasn’t disappeared into my mouth yet, and try to stretch my lips out far enough to see them. I don’t succeed, but it will probably annoy Father.
“Stop pulling faces and behave properly at my table! You don’t just look like your wretched mother, you’re as insane as she is too! March to your room! Now!”
But I am Zora, and I stay seated, casually buttering another slice of bread. Then I take the teapot and pour myself another cup. A glance at my father tells me that he is about to slap me, so I finally get up, take the slice of bread and the cup, and climb up the stairs.

“Get up, Little Red Riding Hood, and feed the chickens!”
I feel as though I haven’t closed my eyes all night, so I decide to sleep in a little longer, pulling the blanket up over my ears.
“Damn it! Do I have to shout the house down before you get up? You lazy good-for-nothing girl! Shall I beat you out of your bed?”
Uh-oh! That sounds close. “I’m coming!” I answer and jump out of bed.
“Hurry up! You’re going to visit your grandmother today!”
Grandma? I wish I could shout hurray, but if Father knew how much I love to spend a whole day away from him, how much I love the forest and Grandma, he would never let me go. “Must I? I’m so afraid of the forest. Can’t I stay and do my work?” I ask, hoping he will fall for it as usual.
“You’ll do as you’re told! And no more complaining!”
Feeling exceptionally cheerful, I get dressed, go to the henhouse and get to work. When I am done, Father is already standing beside the barn. “Be back before dusk,” he tells me, handing me a basket. “You can eat on the way.”
“Yes, Father,” I reply.
“Well, well. Seems you do know how to behave, after all. Yesterday evening I thought all my efforts to educate you were pointless. Now go!”
Still feeling cheerful, I set off. As soon as I am sure that I am too far away to be heard, I begin to sing a catchy melody everybody knows. I have just changed the words: